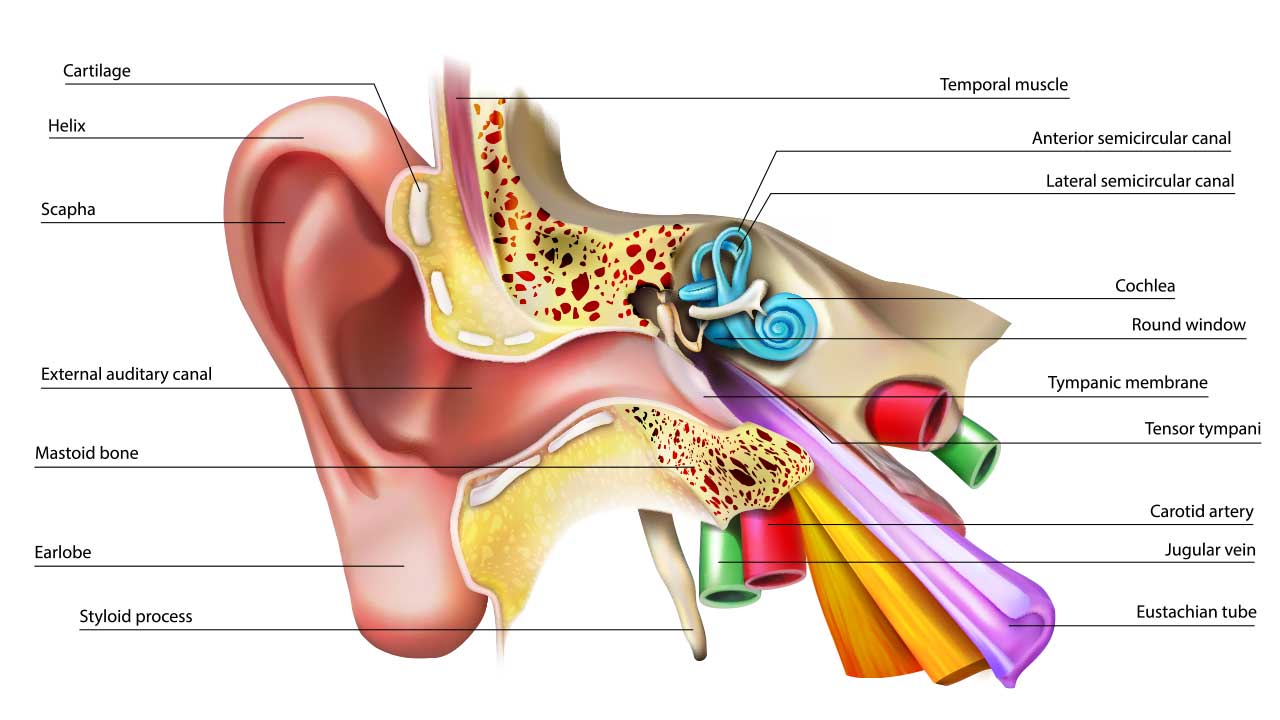 Basics of Hearing 101: The Marvelous Human Ear!
Your ears are extraordinary organs. They pick up all the sounds around you and then translate this information into a form your brain can understand. One of the most remarkable things aboutthis process is that it is completely mechanical. Your sense of smell, taste and vision all involve chemical reactions, but your hearing system is based solely on physical movement. Your ears are in charge of collecting sounds, processing them, and sending sound signals to your brain. And that's not all - your ears also help you keep your balance. The ear is made up of three different sections: the outer ear, the middle ear, and the inner ear. These parts all work together so you can hear and process sounds.

The Outer Ear:
The outer ear is called the pinna or auricle (say: or-ih-kul). This is the part of the ear that people can see. The main job of the outer ear is to collect sounds. The outer ear also includes the ear canal, where wax is produced. Earwax protects the canal. Earwax contains chemicals that fight off infections that could hurt the skin inside the ear canal. It also collects dirt to help keep the ear canal clean.

The Middle Ear:
After sound waves enter the outer ear, they travel through the ear canal and make their way to the middle ear. The middle ear's main job is to take those sound waves and turn them into vibrations that are delivered to the inner ear. To do this, it needs the eardrum, which is a thin piece of skin stretched tight like a drum. The eardrum separates the outer ear from the middle ear and the ossicles (ah-sih-kulz). What are ossicles? They are the three tiniest, most delicate bones in your body. They include: the malleus (mah-lee-us), which is attached to the eardrum and means "hammer" in Latin the incus(in-kus), which is attached to the malleus and means "anvil" in Latin the stapes (stay-peez), the smallest bone in the body, which is attached to the incus and means "stirrup" in Latin. When sound waves reach the eardrum, they cause the eardrum to vibrate. When the eardrum vibrates, it moves the tiny ossicles - from the hammer to the anvil and then to the stirrup. These bones help sound move along on its journey into the inner ear.

The Inner Ear:
Sound comes into the inner ear as vibrations and enters the cochlea ( ko-klee-uh), a small, curled tube in the inner ear. The cochlea is filled with liquid, which is set into motion, like a wave, when the ossicles vibrate. The cochlea is also lined with tiny cells covered in tiny hairs. When sound reaches the cochlea, the vibrations (sound) cause the hairs on the cells to move, creating nerve signals that the brain understands as sound.

Ears do more than hear. They keep you balanced, too. In the inner ear, there are three small loops above the cochlea called semicircular canals. Like the cochlea, they are also filled with liquid and have thousands of microscopic hairs. When you move your head, the liquid in the semicircular canals moves, too. The liquid moves the tiny hairs, which send a nerve message to your brain about the position of your head. In less than a second, your brain sends messages to the right muscles so that you keep your balance. Sometimes the liquid in your semicircular canals keeps moving after you've stopped moving. Your brain is getting two different messages and is confused about the position of your head. Once the fluid in the semicircular canals stops moving, your brain gets the right message and you regain your balance. Sometimes the balance does not recover and you may need to visit a specialist for more help.

Audiologists can examine all the parts of the auditory system using a series of tests that measure hearing and hearing loss and other auditory / vestibular disorders. Specialized equipment is used to measure many different mechanisms of the auditory and vestibular systems. Keeping your hearing safe from loud noises and excess sound can help maintain good hearing for a lifetime of fun!